Our Opinion: Some of the Best Plumbing Inventions Ever

Our Opinion: Some of the Best Plumbing Inventions Ever

In many European cities in the 1800s (before indoor plumbing came into widespread use) residents would simply deposit their urine and fecal matter in chamber pots and then throw the contents of the pot out the nearest window (look out below)!

Ancient plumbing systems were actually invented and widely used in ancient Persian, Indian, Greek, Roman,  and Chinese civilizations, but an indoor toilet with piping that would take the human waste from within the home to some type of public sewage system didn’t become widespread in the U.S. until – at the earliest – the 1930s. (In fact, 630,000 American households still don’t have complete plumbing facilities, lacking either a toilet, shower, bathtub or even running water!)

So, when it comes to what we believe are the best plumbing inventions ever created, indoor plumbing is definitely among the list!

Here are some more:

Imagine taking a bath or shower in cold water. Or having to heat your bath water in a kettle and then pouring it into a tub (and doing so again and again) in order to take a hot bath? That’s what we’d all be doing today if it weren’t for hot and cold running water, which came into use in U.S. homes nationwide also no earlier than the 1930s. But, thanks to modern hot water heaters, we don’t have o worry about those things anymore. 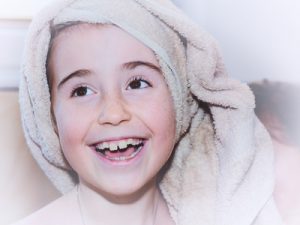 Would she have such a happy face if she had had to take a cold bath?

As mentioned above, many European city dwellers simply “flushed” their waste right out their windows onto the streets below. Many rural homes had outdoor outhouses to which residents would walk day or night, during humid or frigid temperatures to relieve themselves. “Water closets” came into vogue in the 1800s. These were a small room in the home to which individuals went to relieve themselves while sitting on a wooden seat with a hole cut out; the human waste would fall into a container which someone (a maid if the family were wealthy, perhaps a young child if the family were not) would have to empty regularly.

As mentioned above, indoor plumbing – and the underground sewage pipes needed to carry the human waste from the house – didn’t become widespread in the U.S. until after the 1930s.

This sounds complicated but the single-handed mixing faucet is…the faucet that mixes hot and cold water into a single stream so that you don’t have to use one faucet for cold and another faucet for hot. Invented by Al Moen in 1937 (he got the patent for it in 1942), the mixing faucet gives a user a single stream of water at a temperature as hot or as cold as he desires.

What do you think of our choices? Is there a plumbing invention you think we missed? If so, contact Plumbing Dynamics  and let us know.