The Advantages of PEX Plumbing Pipe

It’s called PEX piping, and plumbing experts are hailing it as a big leap forward. PEX stands for cross-linked polyethylene. And it has some big advantages.

First off, it is only about a third of the cost of copper pipe, and it is faster and easier to install. Some have described it as similar to a garden hose. The nice thing is that it is much easier to connect it compared to the soldering you have to do with copper. You also don’t need as many fittings as you do with copper pipe. Because it is flexible, it can bend 90 degrees, doing away with the need to attach two pieces together to turn a corner. The pipe can even be color-coded, red for hot and blue for cold, or you can use just white. 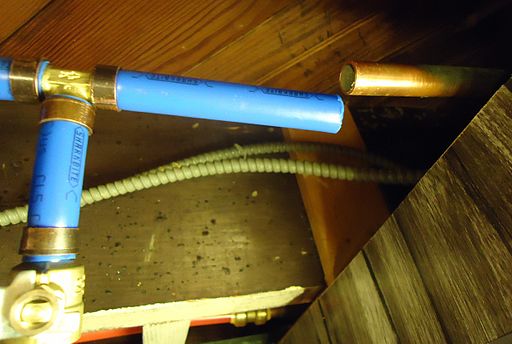 And because it is made by extrusion, you can cut it to any length you want, so you can install long pieces of it without having to attach anything together. It also conserves energy better than copper because it doesn’t transfer heat.

Water also moves more smoothly through PEX than it does through copper and so is much quieter.

Another advantage of PEX is that is doesn’t corrode like copper. This is important if you have water that is slightly acidic. In addition, it also resists scale buildup.

PEX also is better to use than CPVC pipe, mostly because you don’t need to use glue to attach the pipe together. It is also less likely than CPVC to burst if it freezes, and PEX is more flexible.

PEX has also been proven reliable. It has been used for around 30 years in other countries. When problems arise, they are more the result of slipshod installation or fittings that have not been attached properly.

It also appears that PEX can withstand freezing temperatures because it can expand and contract.

There are several ways to attach PEX pipe together. One way is through the use of a copper crimp ring. You put the ring over the pipe, a fitting is inserted inside the pipe, and the copper ring is crimped over the pipe using a crimping tool. This is the most popular method.

Another way is through the use of an expansion tool that expands the diameter of the pipe. Yet another way is by using a stainless steel clamp. And standard compression fittings can also be used.

Even if you have experience replacing piping in your Carrollton home, and as easy as PEX piping is to work with, we highly recommend you call upon plumbing installation experts at Plumbing Dynamics. Contact us today for more information!